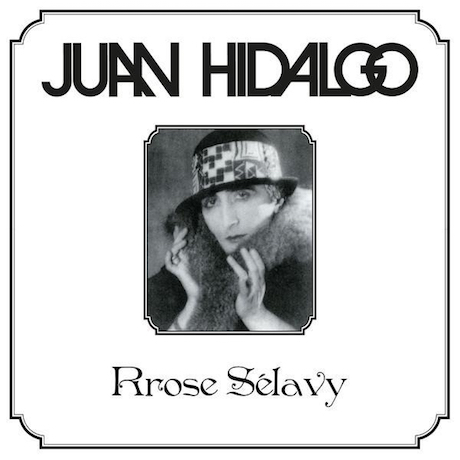 Reading Group is thrilled to distribute the recent reissue of Juan Hidalgo's 1977 masterpiece, Rrose Sélavy for German/Spanish imprint Discos Transgénero. Here is their description of the release:

One-time vinyl edition of 500 copies with the original inner notes by Daniel Charles and additional notes from Julio Pérez and Eloy Palazón.

Juan Hidalgo (1927-2018) was born in Las Palmas, Canary Islands. He studied composition and piano in Spain and later in Paris and Geneva. He moved to Milano in 1956 where he has developed most of his musical career. He collaborated during his career with people like Marchetti, John Cage or Bruno Maderna.

Rrose Sélavy is a unique queer-sound-art piece that claims for revision of the role of the gender in the society through the musical language. Juan Hidalgo played a leading role in definitively abandoning the traditional avant-garde musical research -the problem of music as sound- to devote himself to the musical fact as a search for a language that is creative and critical at the same time. Beyond the abstract notion that the language can be a source of indoctrination, words and language play an important role in the social construction of gender. The musical language also marks and generates a very particular type of social body and listening. Precisely, a change in the syntactic form of sounds would trigger a new listening and a new understanding of the world of sound that surrounds us. Silence and noise are not only two opposite poles within music, but also at a social level.

Rrose Sélavy begins with a celesta solo. A piece based on the relentless repetition of the first five notes of the scale of C major, do-re-mi-fa-sol, but without predictable order, without syntactic logic between them and without any series of tonal hierarchies between them. Since this hierarchy is missing, there is neither beginning nor end; The duet's piano, while remaining within that narrow range of pitch, expands the ground to other octaves. From the trio to the final sextet, the inclusion of new sonorities adds nuances and dimensions to what -at first- looked like simple children's music.

This is a truly "rare" example in form and content in the arts scene, despite the stumbling block that has seemed to be for decades for the history and historiography of traditional style, determined to evaluate movements, concepts and actions, is perceived nowadays, once again and as always, as a gradual, free and liberating flow, always new, always open, always ready to "start over".

Rrose Sélavy is an album originally released by Cramps Records in 1977 and now reissued by Discos Transgénero. This posthumous official reissue includes the original inner notes by Daniel Charles in addition with notes from Julio Pérez and Eloy Palazón in a limited edition of 500 copies. This is not distributed in digital formats and there will be no-repress.


Back to Reading Group