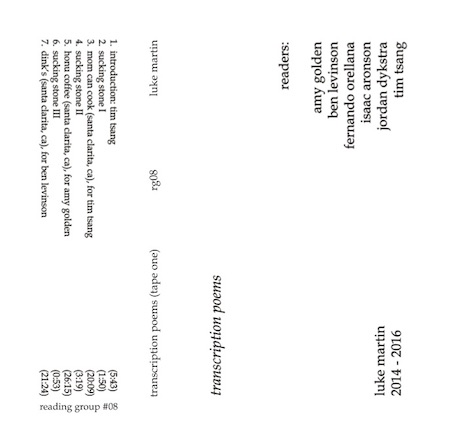 i recorded this project while i was living in santa clarita, ca/was at calarts. i asked six friends there—amy, ben, fernando, isaac, jordan, and tim—to be the readers of six transcription poems written specifically for each of them. these are six people (of many, of course) who i admire and who have influenced me during my time in california—by way of their work as artists and musicians, conversations we've had, seeing them at shows, playing music with them, observing their kindness toward others, their ability to challenge me to think in new ways (without explicitly meaning to), and so on. we've become (and this isn't unique or special) part of one another's (mental) social space, which is filled with countless other voices, opinions, thoughts, works, decisions, of people and places both dead and alive. some aspects of this we're aware of and some we're not. this space—which i'm fascinated by—is both imaginative and real (or makes those things fuzzy). it is hard to pin down or know what's what when consciously exploring it. maybe it is this cluelessness that i like. what i can intuit, however, is an intriguing sense of other-dimensional community and potential: an expansiveness, a kind of echoing of voices or thoughts across great distances that appear as offerings or suggestions of possible connection.

in this instance: i asked my six friends to tell me what restaurant/food service place was their favorite and/or most frequented in santa clarita (where calarts is located). i used those locations as the six places for the act of transcribing (environmental dialogue) and writing (their to-be-embedded poems); a kind of peering into the everyday, yet marginal areas of our spaces, which may or may not intersect with one another. appearing between and bleeding into the readings are short noise tracks, cut up from a set performed by some friends (isaac, ben, me). it is a focused dive into our (mental) social spaces and, in a way, an odd trace of my time there, in LA, and of these people.

digital at our Bandcamp.

Back to Reading Group